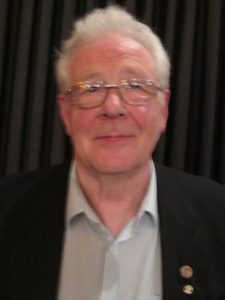 We are sad to have lost one of our members, Doug Wilson, who passed away on 29 March after a lengthy and debilitating illness. Although, a relatively recent recruit to Ayr Rotary Club, Doug was no stranger to Rotary, having previously been a member for a number of years of clubs in the home counties.

When he joined our club, Doug was quick off the mark to deliver his “jobtalk”. Although a trained electrical engineer, his real vocation was in the Boys’ Brigade and it was his long, and continuing, service to the BB (60 remarkable years from early boyhood) that Doug chose to tell us about.

In 1981, Doug made one of life’s big decisions: to move to Stevenage, Herts to become a full-time BB training officer for England and Wales at the then-London HQ of the organisation. This was a dream-come-true for Doug to convert his part-time leisure activity into a full-time career. However, life rarely runs smoothly and the BB chose, 5 years later, to move HQ to Glasgow and, after another 5 years, to Cambridge. Douglas moved too, on both occasions.

The BB is one of the biggest Christian youth organisations in the UK and has 50,000 members and 15,000 volunteer leaders so it was no easy job that Doug had taken on. However, his motivation and enthusiasm for the task was evident to all. Over the years Doug witnessed and encouraged the best of youthful endeavour in an organisation which empowers boys to make good, rational decisions in life for the benefit of society generally as well as for self-improvement. Doug himself derived a major side-benefit by meeting his future wife, Christine, through a BB exchange visit and together their lives continued to revolve around BB. A few years ago they retired to Ayrshire but, for Doug, the adventure didn’t stop and he became an invaluable company officer at both17th Ayr (Castlehill) and 12th Ayr (Coylton).

In the course of his talk Doug gave examples of big events in BB history in which he had been involved (e.g. as a youngster at the massive Hampden Park open-air service and, as a leader, at memorial services at the Cenotaph). In contrast, he highlighted some of the difficulties working with youth today as result of child protection laws and health & safety regulations. However, the movement endeavours to keep up with cultural and societal changes and to support boys in dealing with these.

Doug’s obvious dedication and commitment to youngsters will be sorely missed but he has left a lasting legacy in the lives of hundreds of boys (many, now men) who have benefited from his mentoring. His motivation, enthusiasm, devotion and magnificent work in service to the Boys Brigade will surely continue to be much appreciated by all who knew him.

Our thoughts too are with Chris, who was a great strength to Doug, both in the BB movement and throughout his period of illness. She has been a dedicated and uncomplaining wife who always extended a friendly welcome to Doug’s recent visitors. We wish her peace of mind.