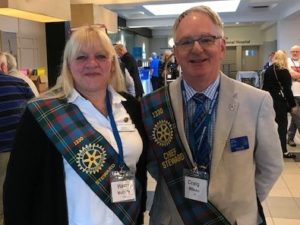 As is customary, President Ieuan reported to the members on the previous week’s Annual District Conference held in the Golden Jubilee Conference Hotel, Clydebank. He was accompanied at the event by a good turnout of half-a-dozen other willing participants. This allowed useful discussion and clarification of a number of club-related issues such as Aquabox, District grant application, Youth and Community Service matters. Thanks to all involved.

Ieuan gave an excellent summary presentation of the main speakers at the conference:

1st – Paul McNeal – Managing Director of the Gloag Foundation, Ann Gloag’s Family Charity, referring to their approach and efforts, in Partnership with Rotary, to eradicate the medical condition ‘Fistula’ affecting women in third world countries such as Africa in particular.

2nd – Matt Stewart an Entrepreneur, quite an extrovert, who talked on his visits to schools and working with young people emphasising how ‘Attitude’ is in his opinion, is the main ingredient in achieving ambitious goals, and influence people when at the same time recognising an ‘Opportunity’ to make a difference. Matt accepted an invitation to visit our Club early in the New Year to discuss and explore how he might help with our Work Tech Shop through our Community Service agenda being led by John.

3rd – Dr Peter Hughes OBE – with his extrovert personality, provided a wonderful presentation in relation to ‘Primary Engineer’ which inspires youngsters in Science, Technology, Engineering and Maths (STEM). He also has accepted an invitation to visit our Club to discuss and provide advice in relation to our, initiative through ‘Youth Service’ led by Hugh Millar, in helping to promote the ethos of Engineering /STEM through ‘Primary Engineer’ in those schools in Ayr.

4th – Robert Strachan on Disaster Aid UK & Ireland referred to its relationship with Rotary. It was recognised that there is a synergy with Aquabox, other activities associated with Rotary such as Shelter Box. Robert is a former Trustee and now Chairman of Disaster Aid, referred to the close links with Rotary world-wide and also at Club and district level.

5th – Talk by two recent Mechanical Engineering Graduates from the University of Strathclyde, Elizabeth Collins and Campbell Simpson, who explained their involvement with Wind Aid Charity facilitating, designing and installing low power rated (2.5 kW) wind turbines in Peruvian villages, and in particular for a school in the Andes.

6th – Finally the Talk by Jean Best on her ’Peace Project’ which enables young people to develop skills to deal with many of the conflicts faced with in their lives. She listed a raft  of problems facing many children, including mental health problems. Ms Best outlined the Peace Project’s role which is fully supported by RIBI, and referred to the many hubs that have been set up within UK and Ireland including many secondary schools.

Ieuan was followed by vice president Hazel McCully who described all her networking efforts during the weekend. She had had interesting and helpful discussions with many attendees including especially Jean Best (see above), Susan Simpson of SIMBA, Gordon McCorkindale of the Allander Global Grant Project (Kidney Kids) and Geraldine Angus and Barry Hardy of WaterAid.

Hazel informed us that she had agreed to become a Peace Project ambassador in Ayrshire.

Jim Nelson gave the vote of thanks.