On Saturday 23 June, almost fifty pathminders, stakeholders, and special guests gathered at the Bracken Bar, Heads of Ayr, to celebrate the tenth anniversary of the opening of the Ayrshire Coastal Path and what a wonderfully convivial evening we all enjoyed thanks to the efforts of Alistair Tyre and his small team of organisers: Ian Alexander, Gus Iannotti, Bob Gibson, Paul Williams, Euan and Katie Nicol. 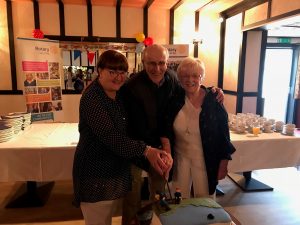 Jimmy and Helen with June

Douglas Haddow, with so many people to thank, did an excellent job in his keynote speech and noted that it was particularly gratifying to welcome Jimmy Begg, creator of the path, and his wife Helen to the proceedings. Jimmy was presented with a copy of his own guide book signed by many of those involved, and with an oak-stave ACP clock beautifully crafted by Bob Gibson.

The great cooperation of the farmers and landowners along the many miles of the ACP was acknowledged along with their commitment to the Path over the years (originally based on a handshake, trust, and mutual goodwill) without which the path would have been a non-starter, instead of the great attraction it has now become. Over the years, this goodwill has developed into extended cooperation at our Annual Rotary Beach Clean and to much-valued, routine maintenance assistance.

The regular financial support from the South Ayrshire Waste Environmental Trust has been crucial to the creation and ongoing success of the Path and Douglas expressed thanks to Dick Peddie of SAWET and fellow Trustee and Chairman of SAWET, Garth Foster.

Appreciation of more practical forms of support and professional advice were recognised as coming from South Ayrshire Councils through Rachel Shipley their Access Officer, Neil Feggans of Environmental Planning, and Fiona Ross, former SAWET administrator. Likewise, in North Ayrshire Council, Louise Kirk their Access Officer for many years has been a stalwart supporter of our efforts.

Last but by no means least in the acknowledgements were the staunch team of Pathminders. From a small group of a dozen willing Rotarians, struggling to get 2-4 folk out for a morning’s work, we now have a great squad of approaching 50 Rotarians and Non-Rotarians, men and women, who have done a fantastic amount of work over the past two years: firstly building the new steps at the Smugglers Brae, and this winter and spring spending 6 months and over 600 man hours building over 100 steps, three bridges, and carrying in 15 tonnes of whin chips to surface 300 metres of path down Fisherton Gully. Instead of 2-3 workers, the norm was 4-6 out on a morning with the record being 12 volunteers on one occasion. Without them to carry out improvements and maintenance, the Path would be impassable.

Douglas concluded by thanking David Semple, owner of Heads of Ayr Holiday Park, for his excellent catering; June Gibson who provided the super 10th anniversary cake; Euan, Katie and Charlie Steele for the highly-appreciated photo-montage; and Gus for providing Prosecco for all the guests.